The Santa Clarita Valley’s reputation as a family-oriented community and the business-friendly community has drawn people in record numbers. This destination of choice is one of the fastest-growing communities in the state and the nation.

Discover for yourself why many say the Santa Clarita Valley is the brightest discovery in the Golden State. Read about the valley’s many varied communities, and find which one best fits you, your family, and/or your business.

Santa Clarita is a leader among California cities and prides itself on its role as a first-choice community for both families and businesses. The city lies in a picturesque valley between the Sierra Pelona, the Santa Susanna, and the San Gabriel mountain ranges just 35 miles from downtown Los Angeles.

With its own bustling urban area, Santa Clarita is home to a variety of industries, affordable housing, abundant jobs, and easy access to the Los Angeles basin.

The 46.7-square-mile City of Santa Clarita proper contains the majority of the 200-square-mile valley’s population in the communities of Canyon Country, Newhall, Saugus, and Valencia. In 1969 the Signal, the valley’s local newspaper, published an editorial urging readers to unite and become a city, sparking a movement for cityhood.

Over time readers were convinced that as a city they would have a louder voice in the Los Angeles County, and residents’ concerns over paying higher taxes as an incorporated community were addressed. A citizens’ committee demonstrated that the Santa Clarita community was generating more money for the Los Angeles County than the county was investing in it.

This venture has proved successful. Santa Clarita is the 24th-largest city in the state and one of the nation’s 150 biggest cities. Based on its size, Santa Clarita plays an important role in the county and has drawn attention from business leaders, who are taking a close look at how the city has accomplished this in the few years since its incorporation.

The city has been named the second-best mid-sized city in the state in which to do business by California Business magazine and one of the top five “up and coming” cities in the nation by City and State magazine. Additionally, according to FBI statistics, the City of Santa Clarita is the fifth-safest city among U.S. cities with populations over 150,000 and the safest city in Los Angeles County. 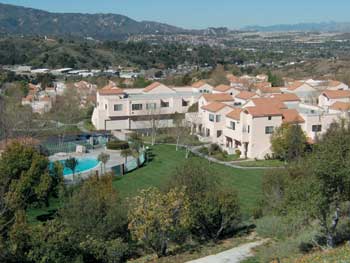 Along with Saugus, Newhall, and Valencia, Canyon Country is one of the four communities that form the City of Santa Clarita.

Click here to search for homes in Canyon Country!

The oldest and most historic of Santa Clarita’s communities, Newhall pays homage to its long history on Old Downtown Newhall’s Main Street, an avenue of shops, theaters, and restaurants complete with period lighting, architecture, and landscaping.

Founded in 1876 by railroad tycoon Henry Mayo Newhall, the area was the setting for many of the earliest westerns. William S. Hart helped to memorialize this heritage by bequeathing his famous home and property to the county. Newhall has grown beyond its origin as an oil, mining, and farm community to include many diverse residential developments, though it still serves as one of the valley’s three railroad stops, by means of the Metrolink.

Originally a sleepy little town surrounded by a few large ranches, Saugus grew and expanded in the late 1940s when many in the post–World War II America moved west.

The community, still dedicated to family living, has developed around Bouquet Canyon Road, which extends through picturesque hills all the way to the Antelope Valley. Recently a residents’ survey showed that 70 percent of homeowners want Saugus to remain a bedroom community rather than becoming a business-oriented area.

Saugus’s many amenities include the Saugus Speedway and Swap Meet, one of the oldest and largest open-air markets in SoCal; Castaic Lake Water Agency’s filtration plant and education center; a Metrolink station; and the Mountasia Family Fun Center, which offers an arcade, roller skating rink, go-kart racing, miniature golf, and a batting cage.

Like Newhall, Saugus has a long history. In 1887—the same year the famous Saugus Café opened—the Southern Pacific Railroad established a train stop in the area and named it Saugus after Henry Mayo Newhall’s birthplace in Massachusetts.

Bringing actors William S. Hart, Tom Mix, and Gene Autry to the area, Hollywood frequently used Newhall and Saugus for filming westerns, and the area’s rugged wilderness came to define the classic western scenery. In fact, Saugus was the real-life setting for one of the West’s last nonfictional train robberies in 1929 performed by “Buffalo” Tom Vernon. 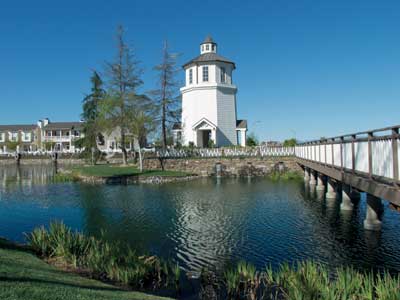 Recently named one of the 50 best places to live in the United States by Fifty Fabulous Places to Raise Your Family, this popular community grew out of a master plan created by legendary planner Victor Gruen in 1965 that would focus on every aspect of modern life—work, recreation, shopping, medical care as well as residential development.

Valencia is also home to two distinguished educational institutions, the College of the Canyons and the Disney-endowed California Institute of the Arts. The future campus of the University of California at Los Angeles Film and Television Preservation Center will be located on 60 acres directly between these two campuses.

Stevenson Ranch is located at the edge of the Santa Clarita Valley in the foothills of the Santa Susanna Mountains. A quarter of the community has been set aside as designated open space and parklands, offering beautiful views as well as a wide array of home choices for many and varied families.

A close-knit community dedicated to a family-oriented lifestyle, Stevenson Ranch delivers notable education opportunities to the area’s parents. The Stevenson Ranch Elementary School has been named one of the select few “California Distinguished Schools.” Stevenson Ranch’s many outstanding schools were planned from the community’s beginning to provide enough space for the growing area’s educational needs.

Click here to search for homes in Stevenson Ranch! 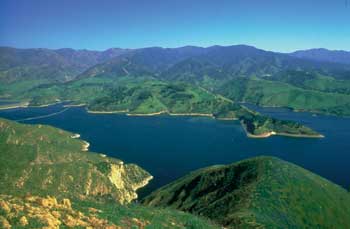 A fast-growing and popular community, Castaic is predicted to triple in 5 years in population. Located at the northern end of the Santa Clarita Valley along Interstate 5, the state’s main north-south artery, Castaic has a long history as an important asset to travelers. In 1887 the Southern Pacific Railroad added a train stop at Castaic Junction. In 1914 Castaic offered small restaurants and automobile services to travelers on the Old Ridge Route, which opened that same year. To date, the area’s commerce still benefits from accommodating travelers and truck drivers as one of the last places to stop for goods and services before heading over the Grapevine into central California.

However, it is Castaic’s recreational offerings that bring the area the most attention. It is home to Castaic Lake, the western end of the 600-mile California State Water Project. The massive lake provides recreational opportunities, including lake and land sports and camping, to all of northern Los Angeles County and millions of tourists. It also provides nice scenery for the filming industry.

Castaic also encompasses the 1.2 million-square-foot Valencia Commerce Center at the intersection of Interstate 5 and State Route 126. It features a 1,800-employee postal center, the corporate headquarters of Remo Inc., ITT, Ultraviolet Devices Inc., and other corporate giants.

Val Verde developed as a rural neighborhood after the Gold Rush of the mid-1800s. Once known as Eureka Villa, a resort, and farming area, Val Verde today comprises scenic hills and custom homes. A small community located north of State Route 126 and west of Interstate 5, Val Verde offers its 800 residents a quiet remoteness, small shopping facilities, a large park with an Olympic-sized pool, and the health services of the Sam Dixon Medical Center.

Click here to search for homes in Val Verde!

Acton started as a mining town in the late 1800s when gold, copper, and titanium ore were found there. Copper was mined at the Mount Emma Mine and gold was mined at the Red Rover and Governor mines. Currently home to about 10,000 people and many horses corrals alongside many custom homes located along the foothills of mountain ranges to the north and to the south, Acton retains and embraces its old western past.

Acton boasts the 49er, a western-style saloon that was built in 1889, and Shambala Preserve. Run by Tippi Hedren, this preserve serves as a haven for exotic big cats from circuses, zoos, and private owners and is open to the public once a month by advanced reservation. Acton’s many recreational offerings also include private campgrounds throughout Soledad Canyon.

Agua Dulce’s monolithic Vasquez Rock has played a central role in the area’s history. First sheltering the Tataviam Indians, the rock formation then served as a hideout for Mexican bandit Tibercio Vasquez, who was caught in 1875.

In the 1880s farmers created Soledad Township, which eventually came to be known as Agua Dulce. With large horse properties, fine equestrian amenities, and beautiful views, the community preserves its western heritage with street names that include Wagon Wheel Road, Yucca Hills, and Durango Lane.

The Vasquez Rock County Park serves as the backdrop for many movies as well as the area’s annual fair, parade, and sunrise events. Additionally, pilots with private planes enjoy the 190-acre Agua Dulce Air Park.

Click here to search for homes in Agua Dulce!

The Newhall Land & Farming Co. has planned a 21,600-home community complete with shopping, commercial and public service, cultural facilities, and recreational amenities west of Interstate 5 along State Route 126 that will house about 60,000 people.

A master-planned community, Newhall Ranch will comprise two fire stations; a water-reclamation plant; an electric substation; a library; an 18-hole golf course; 50 miles of pedestrian, equestrian, and bicycle trails; commercial centers within walking distance of 59 percent of the area’s homes; five elementary schools, a junior high school, and a high school financed by the developer to be built over 25 years; and a 19-square-mile open space that will consist of 51 percent of the self-contained community’s area. Additionally, Newhall Ranch will deliver approximately 19,300 permanent jobs.

Want to know how your current community compares to the communities in Santa Clarita Valley? Go to: www.SantaClaritaHomesForSale.com, click on the Market Insider tab, and then click on “Compare Areas”. Type in two different zip codes and you can compare everything from community demographics and school test scores to crime rates and weather.